This week I thought the battery on my scale was broken. Three digits stared at me, in an order I refused to believe until I’d stepped off and back on three different times.

Digits I kept on my driver’s license for decades, knowing full well they hadn’t been true since Clinton’s second term (bless the DMV registrars who never asked!)

It’s taken me 200+ days to get here, and only after seeing a picture from my son’s birthday party that laid bare what I could no longer deny.

On January 7th, 2017, even in the most generously cut articles of clothing, I was bulging at the seams – the biggest I’d ever been.

Sure I wanted to look better, but more than anything, I wanted to replace the excuses I’d long believed about food and genetics with a lifestyle change I could forever honor.

It started with the ego bruising truth that the body I wanted (or not) starts in the kitchen.

Survey my then pantry and you’d find no more processed junk than you’d find now. Ditto for the fridge. I was already eating somewhat healthfully, wasn’t I?

But it’s not just the what. It’s the how much. And the when. And the fuzzy math that takes hold when you live by the rationale: “I worked out today. Ice cream for dessert!”

My portions were bigger than I thought. My exercise effort less than I thought. And that nightly glass of red “for the health benefit”? Didn’t feel so healthy hoofing it up the stairs at home.

After being off and on My Fitness Pal since 2013, I downloaded it (again), this time with renewed vigor.

I set the weight loss goal to a realistic 1 pound per week. Starvation, deprivation and severe caloric restriction? No thanks.

Then the gym, where I gave Group Fitness classes a go. In a matter of weeks, I felt welcome amongst the regulars, and the once intimidating became empowering.

When I started, I was lifting little more than the equivalent of a laundry basket. Now? What I’ve lost in waistline I can lift in barbell.

It hurts like the dickens and I sort of loathe doing it, but one look at the silver haired grandmas that routinely kill it in these classes and I remember why I’m here.

In the moments when it’s not easy (and they are often), when the very thought of queso by the bowlful and bottomless baskets of tortilla chips leaves me weak in the knees, I need a goal closer to the present. Long term health can seem a distant priority when cravings strike.

So began my frivolous idea, a little something to cling to at the end of the third set, when I’d rather face plant than do another pushup.

When last I wore a certain dress, I had a bride’s motivation and a twenty something’s metabolism. Lucky if I could zip a thigh into it now. But what if…? 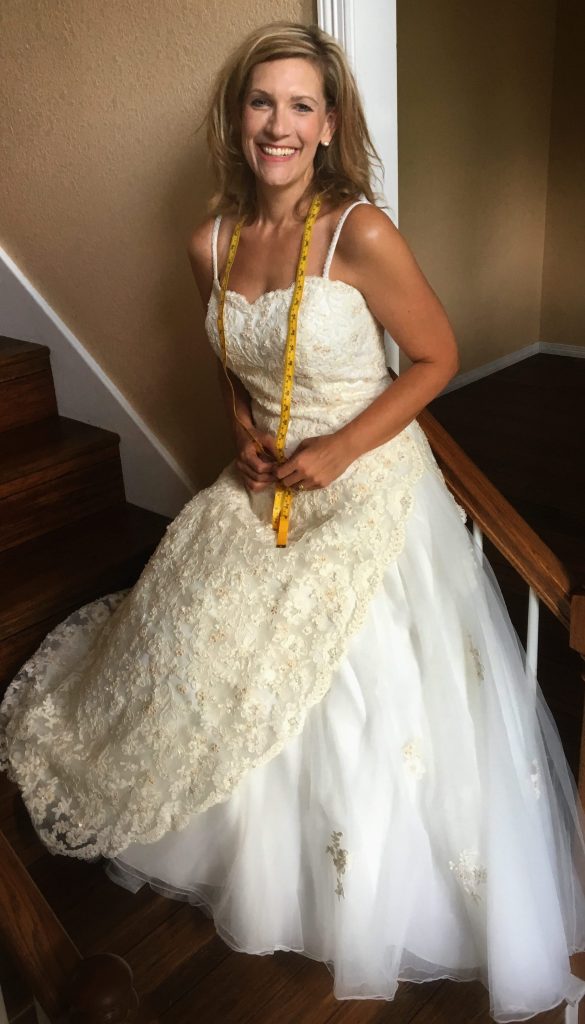 So while I kept making my family’s favorite foodstuffs, I also tinkered with ingredients for me, tweaking recipes til I learned how to split my macros and satisfy my sweet tooth.

On the “I don’t wanna” days, I worked out anyway. It didn’t matter if the gym was closed due to a power outage, or if my favorite class was last minute cancelled and I left my earbuds in a drawer at home (rookie mistake).

Every other day? I thought about The Dress and belted out each burpee, put a little more jolt in my jump squats, and full range finished the air jacks.

When I felt like dropping onto the mat in a sweaty heap, I remembered The Dress and reverse crunched instead.

Were it not for The Dress, I wouldn’t have plank attempted “Thread the Needle,” (a move I’ve yet to master without falling over).

Before I knew it, my initial weight loss turned double digits. So spurred was I to keep going that one Sunday afternoon in May, I started two-a-days – a rare occurrence still, and only on the weekends when I wake with a little Beyonce in my step.

Still, as fun as it was to twirl around in the old gown, this was really never about The Dress.

It’s about a lifestyle changed for good, and understanding that there is no finish line.